The Girl With The Red Coat 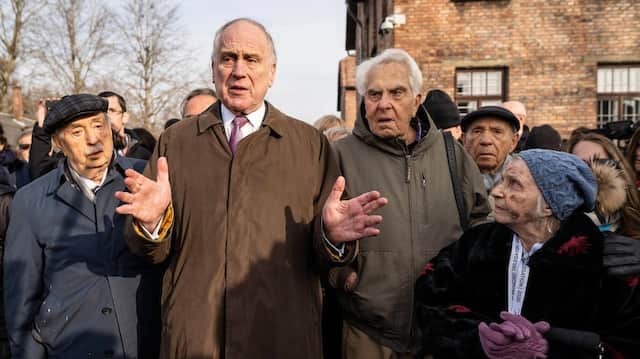 Ronald S. Lauder Bild: AFP
The annihilation of the Jews in Auschwitz was perpetrated by Germans and Austrians. But it also happened because Europe und the United States did not care. What does this mean for the fight against Anti-Semitism today?

Your Majesties, your Excellencies, Rabbis, Clergy, honored guests and, most importantly, the survivors of Auschwitz-Birkenau, who are with us today.

This is about you, the survivors and I cannot begin to tell you how grateful I am that you are here and in some cases, here with your children and grandchildren. Five years ago, when I stood here, in front of these painful gates, I admitted that I am not a survivor: But I am so grateful for the survivors who are here today. I am not a liberator, although I salute the courage of the veterans who saved us all.

I am here, simply, as a Jew. And, like all Jews everywhere, this place, this terrible place called Auschwitz has sadly become an inseparable part of us.

Auschwitz is like a scar from a terrible trauma. It never goes away and the pain never stops. I have always wondered, if I had been born in Hungary, where my grandparents were from, instead of New York in February, 1944, would I have lived?

The answer is: no.

I would have been one of the 438,000 Hungarian Jews gassed by the Nazis in 1944 right here in Auschwitz. I can assure you, almost all Jews have pondered this question.

75 years ago today, when Soviet troops entered these gates, they had no idea what lay behind them. And since that day the entire world has struggled with what they found inside.

We have all wondered how an advanced country that gave the world great literature and art and scientific advancement, could sink to an anger, a meanness, a depravity like Auschwitz.

But let me be clear: While Germany and Austria caused, created and carried out this shattering evil practically every other European country helped the Nazis gather up their Jewish citizens. Too many people in too many countries made Auschwitz happen.

And when European Jews begged the world for a safe harbor, someplace to go, the entire world turned its back on them.

Even my own country - the beacon of freedom - turned out its light on the jewish people when they needed it the most.

The U.S. organized a conference in Evian, France, in July of 1938, to discuss the Jewish refugee crisis. There were a lot of lovely speeches but, the United States did not let any additional Jewish refugees in and every other country in attendance followed their lead.

There were 32 countries and none of them, except for the tiny Dominican Republic wanted anymore Jews. Hitler saw this. Four months later, came Kristallnacht.

And again, there was no world reaction.

Hitler tested the world. And at every step he saw the truth: the world did not care. That’s when he knew that he could build this factory of death.

Thankfully, there were some people throughout Europe who had a moral decency and who acted differently. Ordinary people who risked their lives and their family’s lives, to save other human beings sometimes people they didn’t even know.

At Yad Vashem in Jerusalem you will see 27,362 names of what we call: The Righteous Among Nations. Those gentiles, who risked everything to save Jewish lives. We have not forgotten these honorable men and women and we never will. 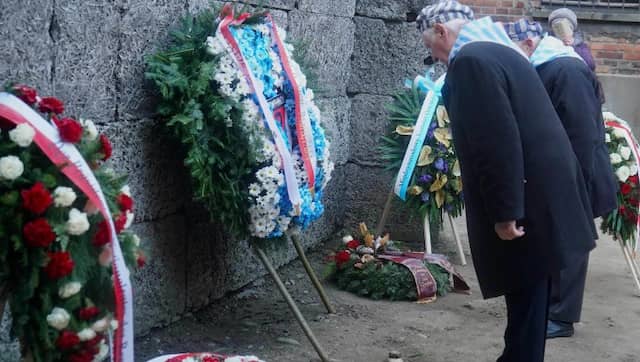 Five years ago, at the 70th anniversary, I was very concerned about the shocking rise of Anti-Semitism here in Europe. Today, you all know the attacks on Jews, the killings, the vicious slanders have only grown worse, and they have even spread to my country.

75 years ago, when the world finally saw the pictures of the gas chambers here and the piles of bodies, nobody in their right mind wanted to be associated with Nazis. But now, I see something I never thought I would see in my lifetime: The open and brazen spread of Anti-Jewish hatred throughout the world, once again.

In 2020 we hear the same lies the Nazis used so effectively in their propaganda: Jews have too much power, Jews control the economy and the media, Jews control governments, Jews control everything. We hear this madness online, in the media and even from democratic governments.

We will never eradicate Anti-Semitism. It’s a deadly virus that has been with us for over 2,000 years. But we cannot look the other way and pretend this isn’t happening. That’s what people did throughout the 1930s and that is what led to Auschwitz.

I remember walking here once with a former inmate named Elie Wiesel. At one place, he stopped and he said something I will never forget, Elie told me that, „the opposite of love is not hate, it is indifference.“ It is indifference that allowed Auschwitz to happen. 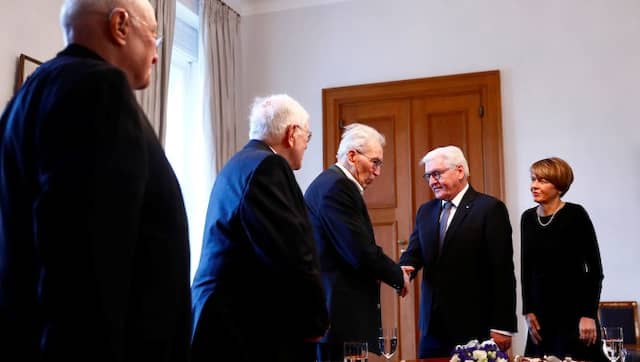 There are 50 countries represented here today. I know each and every one of you is as disgusted by Anti-Semitism as I am. I also know that you, alone, cannot stop this. But all of you can certainly speak out forcefully against it.

We can’t re-write history. But we can be much more forceful today. All of us must remember those brave, moral people who tried to stop this. All world leaders, all politicians must lead in this effort. Words are not enough. Political speeches are not enough. Laws must be passed, severe, tough, real laws that will put these hate mongers away in prison for a long, long time. Children must be educated and know where the hatred of Lews leads. Those are important. But there is another vital way for world leaders today to fight this age old hatred.

I ask all countries to stop casting votes in favor of the U.N.’s constant and shameful fixation on Israel.

Exactly 3 years, 3 months and 3 weeks after the liberation of Auschwitz, the Jewish people realized their 2,000-year-old dream and founded the Jewish state of Israel. If for no other reason, then the fact that not a single country on earth would take in Jewish refugees when they begged for their lives. That is why the Jewish people need Israel.

The Jewish people left Auschwitz, they fled Europe, they were forced out of every country in the Middle East. And instead of living in refugee camps and turning to terror, they built a vibrant democracy in a place where democracy does not exist. They have created miracle after miracle while having to defend their existence every single day. No other country on earth has had to do this. And for this the U.N., journalists and even some world leaders constantly condemn them.

But it’s even worse. Israel has been singled out over and over with the same lies that we heard about the Jewish people for centuries.

We all know these votes are absurd. The U.N. ignores truly evil dictatorships that kill millions of their own people. And it is clear as day, that this kind of obsessive Anti-Zionism, is nothing but Anti-Semitism.

And with every absurd vote, every vote that targets only Israel and ignores the rest of the world, this demeans the entire U.N. and makes it a less serious institution. That is such a shame. Because the U.N. was built on the ashes that we stand over right now. It had so much promise. It could be so much more.

I realize that here at Auschwitz - you are surrounded by numbers. 75 years … 1933 … 1938 … 6-million. But there is one number that still shocks us, while breaking our hearts at the same time.

That’s the number of Jewish children – one-and-a-half million – who died in the holocaust. It is so painful that we try not to think about it. It just hurts too much.

But something else was lost as well. What could these one-and-a-half million have created for us all? What symphonies … ? What great literature … ? What technology …? What medical breakthroughs did we lose from these lost souls?

If you have had a loved one who has suffered from cancer, or Alzheimer’s, or Parkinsons perhaps the cures for those diseases were lost right here at Auschwitz. This was not just a Jewish loss. It was a loss for the entire world.

There is one more part of the Auschwitz story that no one ever talks about. When the survivors were liberated from this Nazi nightmare, they never sought revenge. They lost their mothers and fathers. Sisters and brothers. In too many cases they lost their wives and their children. And in spite of this not one German was killed in retribution by a Jew. Not one !!!

Think about that for a moment. After everything that happened to them, these Jewish survivors just walked out of these gates and went on to build new lives, raise new families, work hard and create. Some have grandchildren here today. And it is shameful that 75 years later they now see their grandchildren face this same hatred again. This is a shame - and it must never be tolerated.

In the end, I’m afraid that all of these numbers – one and a half million children, six million Jews. These numbers are just too hard for us to comprehend. So let me leave you today, with one last story.

It came from the Eichmann trial in 1961, where witness after witness, described their experience here at Auschwitz. But there was one man who stood out, because he spoke in an unusually non-emotional tone. He described arriving at this platform - right here - with his wife and little daughter. They were herded out of the cattle cars, and stood in line for the “selection,” right over there. A doctor decided who would go to the right - to work, - and who would go to the left - for extermination.

The man was separated from his wife and daughter at that moment and they were pushed away. On the witness stand, he said: “There were so many people, I didn’t know how I could keep my eye on them.” But his little girl wore a red coat and he was able to watch the little red coat, until it got smaller and smaller and then he couldn’t see it anymore.

Years later, Bach explained that, as fate would have it, he and his wife had just bought their 3-year-old daughter, a little red coat. And Gabriel Bach said that to this day, if he walks into a sports stadium or a restaurant or he’s just walking down a street in Jerusalem, and he sees a little girl in a red coat, his throat will tense up and he cannot speak. Frankly, whenever I see a red coat on a little girl, I think of the same thing. This is the legacy of Aauschwitz, and it will never go away. 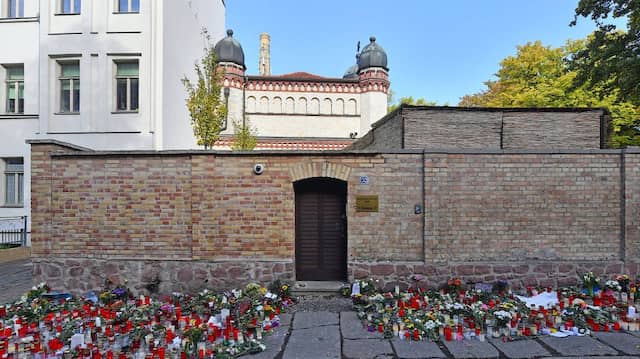 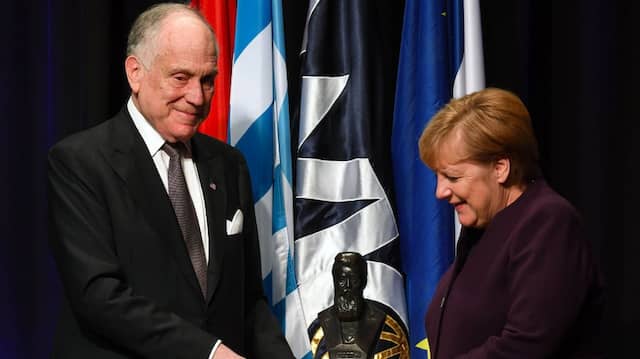 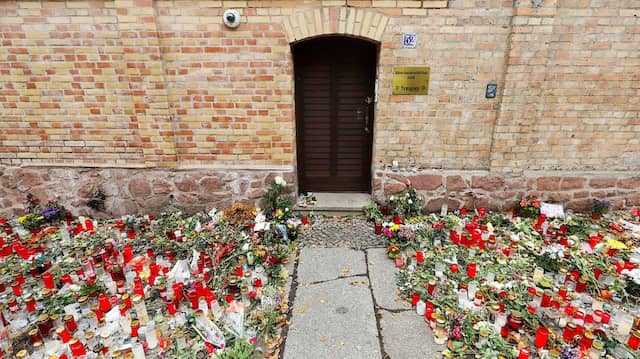 Am Tatort in Halle

To every Jewish person and Non-Jewish person in this audience who leaves these gates today - we must do this: When we hear something that is Anti-Semitic, when we hear someone talk about Israel unjustly, when Jews are attacked on your streets - do not be silent. Do not be indifferent. Good things, great things, can start with everyone one of us. And do not just do this for the Jewish people around the world. Do this for your children, do this for your grandchildren, but also do this for the little girl in the red coat.

Her ashes lay beneath us. along with over one-million other tortured souls. They are watching us and they cry out, in one shattering chorus: Do not be silent!! Do not be complacent!! Do not let this ever happen again to any people !! 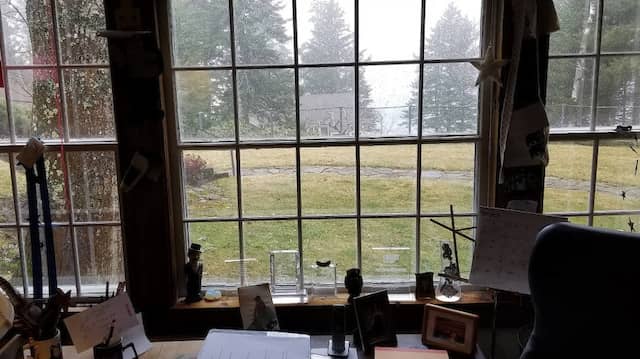 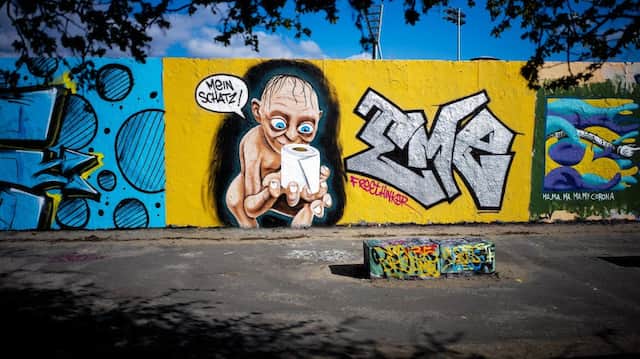 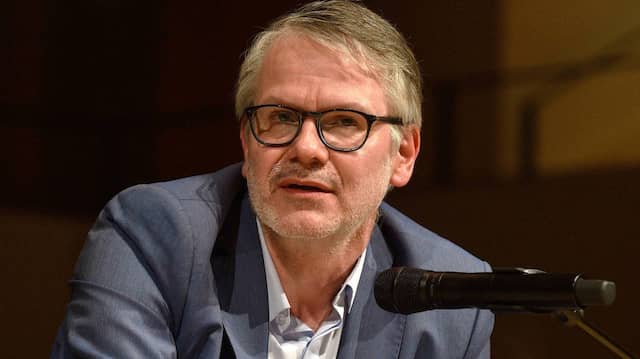