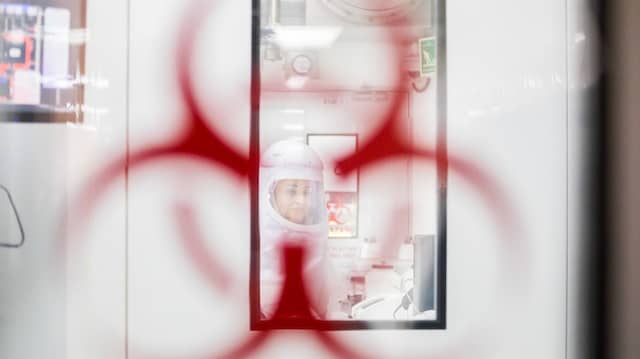 Virology lab at the «National Institute for Communicable Diseases (NICD). Bild: dpa
With its reputation for consensus building, Germany could help drive the effort leading to an international agreement regulating gain-of-function research.
ANZEIGE

The germ theory of disease took hold towards the end of the 19th century. Men like Louis Pasteur and Robert Koch devoted their lives to identifying infectious agents. Soon the distinction between bacteria and viruses emerged. Vaccines quickly came to the fore followed by the first drugs to treat syphilis.

In parallel tough public health measures, including chlorinated water, waded in. Antibiotics made their mark in the 1950s while antivirals, a relative newcomer in the anti-microbial arsenal arrived in the late 1970s. The advent of triple therapy, the combination of three anti-HIV drugs proved to be the turning point in the fight against AIDS.

The arrow flying through this narrative is the highly successful scientific assault on microbes.

Against such progress it may surprise readers to learn that the past decade has seen scientists designing novel human viruses in the lab that are potentially highly dangerous. I say potentially, for they have never been tested on humans for obvious reasons.

Why are virologists doing this? They say their research will help us predict pandemics. Pandemics are relatively rare with Spanish flu in 1918 being the example. That said, I’ve already lived through five pandemics – flu in 1957 and 1968, AIDS in the 80s, flu again in 2009 and now COVID-19.

Far more common are so-called viral spillovers. Chicken flu viruses in particular can spill over into humans, usually poultry handlers. Infections can be lethal – sometimes 6 out of 10 victims will die, which is horrifying. Fortunately, they are rarely transmitted between humans. Viral spillovers occur all the time because there is a plethora of other viruses bumping into fellow humans.

Let’s stick with flu. Researchers were afraid some chicken flu viruses might mutate one day and spark a pandemic. They wanted to know what combination of mutations could morph a spillover virus into becoming easily transmissible between humans by the respiratory route. After deliberate use of powerful gene engineering methods they succeeded.

You read correctly. We now have a dozens of novel viruses in the freezers of several lab around the world. Their genetic blueprints were published in top scientific journals. We must consider these man-made viruses as highly dangerous, some with the potential to spark a pandemic. Of course, they have never been ‘tested’ in humans because that would be ethically impossible. And herein lies the fatal weakness of this work.

Nothing goes right all the time. So it is in research labs. Despite sophisticated safety installations and strict rules in virology labs accidents and leaks happen. Indeed, they are underreported. Well documented accidents have occurred in Germany, the UK, China, the US and Russia. As the 18th century poet Alexander Pope wrote, ‘To err is human’.

While the risk of an accident or lab leak is very small it is not zero. Our societies need virologists brave enough to work on deadly viruses like Ebola, Marburg and Lassa fever viruses. Sometimes, sadly, they lay down their lives in the fight against microbes. I’m thinking of a young woman in her late 20s…

So, the arguments for man-made viruses had better be very good. Right? 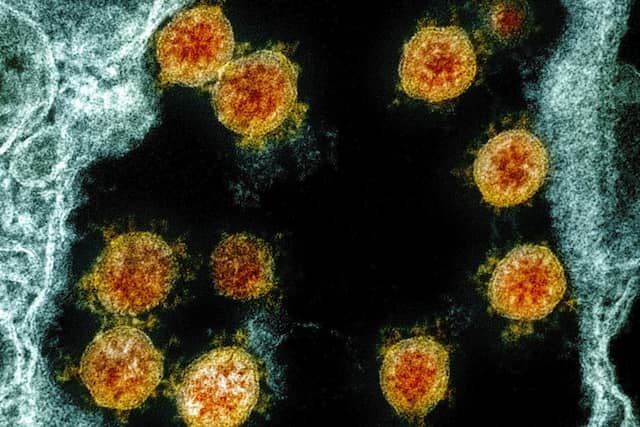 The virologists doing this work said it would help them predict the next pandemic virus. Armed with this insight, they claimed it would be possible to develop preventive vaccines and drugs that could be frozen and stored. At the spectre of a novel pandemic they would be deployed en masse thereby nipping any pandemic in the bud.

It’s a very attractive story that convinced some leading agencies that fund biomedical research. Sadly, it’s a pipedream. For a whole host of reasons involving arcane aspects of virology, predicting the next pandemic virus or strain is Mission Impossible ( also here)

As if this wasn’t enough, our track record in pandemic prediction is zero. Nobody predicted COVID-19. Nobody predicted the 2009 H1N1 flu pandemic. We can’t even predict what is going to happen to flu this winter. Which of the four seasonal flu viruses circulating before the COVID pandemic will come charging back? Virologists in the know all agree that it will be a nasty flu season. No more. With this in mind, you better get your flu jab before December.

Back to man-made viruses. This work has gone by the name of Gain-of-Function research, or simply GoF, because an animal virus is engineered to gain a new function. The ‘gain’ is the frightening ability to transmit efficiently between humans.

If it is impossible to predict the next pandemic, then the idea of producing preventive vaccines and drugs goes out of the window. In short, there are no benefits from GoF virology. We’re we are left with a very small, but finite risk of a lab accident or leak that could have catastrophic consequences for the world.

Weighing up the risks and benefits of such work should be a no brainer. It was for me and many others who don’t believe in making the world a more dangerous place.

Surely GoF virology has been discussed widely? There were both closed-door meetings but and only a few open discussions starting in 2012 after Dutch virologist Ron Fouchier claimed that he had created “probably one of the most dangerous viruses you can make.”

Germany stands out for two reasons. The Deutsche Ethikrat report published in May 2014 discussed the wider ramifications of GoF virology. There is nothing better, anywhere. Then in December 2014 the Volkswagen Stiftung organized an open meeting in Hannover. It covered the vast panorama of human concerns triggered by the genesis of man-made viruses. There’s been no better meeting.

By some estimates, COVID-19 virus has already caused 15 million dead. It has upturned our lives, slammed the global economy and brutally reminded us of our vulnerability to microbes.

It has also reactivated the decade long festering GoF controversy which has roared back into life.

A month ago, a determined group of data analysts, researchers and online detectives going by the colourful name of DRASTIC ferreted out a copy of a March 2018 grant proposal by EcoHealth Alliance, a New York-based organisation.

As part of a $14.2 million proposal, EcoHealth described a program to be conducted in collaboration with the Wuhan Institute of Virology and labs in the US and Singapore, to perform GoF research by cutting and pasting different parts of bat coronavirus genomes to create chimeras never seen before. All hell broke loose.

This shock revelation by DRASTIC was compounded by the discovery that EcoHealth proposed surgically precise modifications that would push these viral chimeras even further down the road towards what must bluntly be called a coronavirus admirably suited to infecting humans.

Bear in mind the proposal was written in 2018, 18 months before the COVID pandemic with its epicentre in Wuhan.

Fortunately, the proposal was rejected by DARPA, the US defence agency, on the grounds that it constituted GoF. What we do not know - and badly need to know - is whether this proposal was submitted elsewhere, financed and performed. Knowing how researchers think and plan ahead, it is possible some of this disturbing work has already been performed.

Throw into this already corrosive mix clear evidence of conflicts of interest, obfuscation and covert lobbying by some of these scientists and their supporters – all played out in top scientific journals - and you have a toxic brew. We have witnessed harsh criticism of any voice contemplating a lab leak - a disgrace that has no part in scientific debate.

What can be done?

Given the extraordinary dangers inherent in GoF virology, and the erroneous yet pervading myth that pandemics can be predicted, we first need an immediate moratorium on conducting and funding gain-of-function research until international and legally binding standards are set. It would need to cover the thorny mission of verification which could entail onsite inspections. 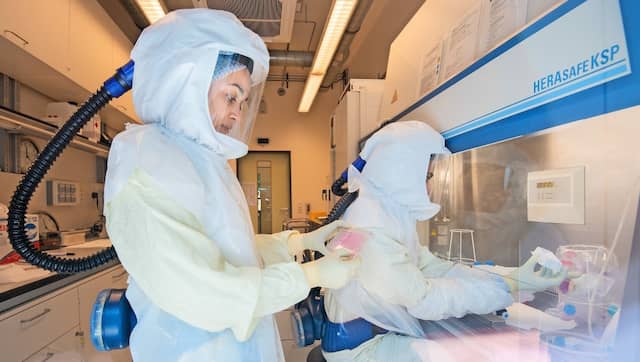 There is precedent. The International Atomic Energy Authority sends inspectors visiting nuclear installations around the globe. One big difference is that there are far more virology labs around the globe. The good news is that GoF research represents less than 0.001% of the virology performed today.

The Biological Weapons Convention was set up in 1972 and is headquartered in Geneva. Violations occurred immediately. Without the power of inspection and a small secretariat it doesn’t have much bite. By contrast, the Chemical Weapons Convention established in 1997 does have bite. It is administered by the Organization for the Prohibition of Chemical Weapons in The Hague, which has 500 staff, a proper budget and is empowered to conduct inspections.

Germany has a reputation for consensus building and could drive international support leading to an agreement regulating GoF as a precursor to an international treaty. A trio of countries that share concerns over GoF research, such as Germany, the United Kingdom and Japan would be enough to get things going.

It terrifies me just to think that the COVID pandemic could have been man-made. For the moment there is no consensus as to the origins of the virus. But with the vertiginous technological firepower that virologists now wield, unchecked gain-of-function research will, one day, result in a pandemic carrying the genetic bar code “Made in the Lab”.

Let’s not end on a negative note. The power of biomedical research in tackling COVID19 – the rapid delivery of effective vaccines and powerful diagnostics in under one year – shows that good virology vastly outweighs the marginal GoF research. We see virology played out every day under white tents on street corners where nasal swabs are taken and results delivered in 15 minutes. It’s stunning, it’s breathtaking.

It’s what we do. Pasteur and Koch would agree - they shot the arrow..Z. 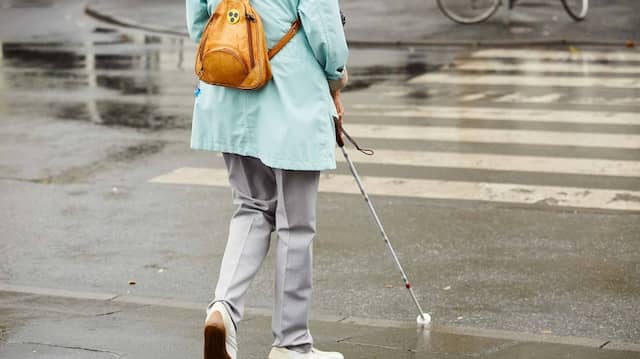 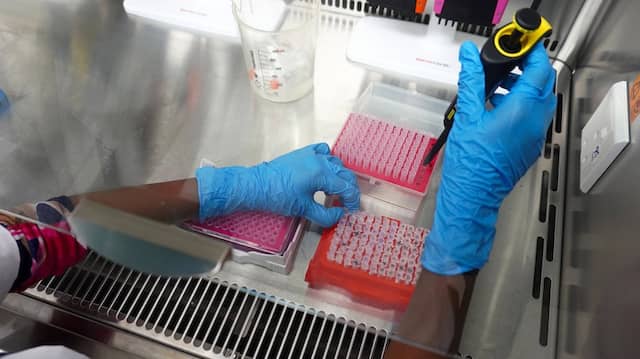 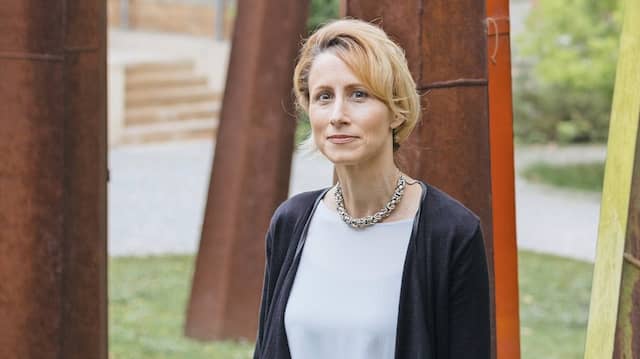 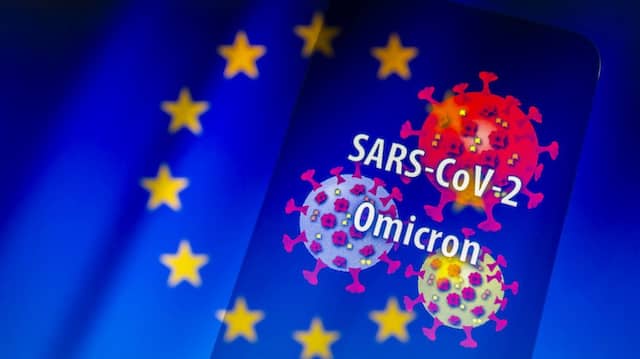